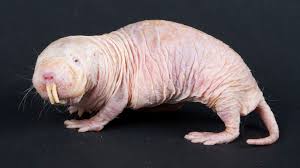 While, it's debatable whether naked mole rats are cute or not, one thing about them is not debatable: the are among the most fascinating animals known to man!

Here are just a few of the amazing facts about naked mole rats:


If any one of these characteristics was to be found in one animal, that animal would instantly be unique. But the fact that all of them are containing within this cute, cuddly animal (sarcasm) makes the Naked Mole Rat one of the most interesting animals in the world!
Posted by Kyle L. Shoop at 9:19 AM No comments: