Amazon's Most Dangerous Animal Is....

Which of the following animals do you think is the most dangerous animal of the Amazon Rainforest? 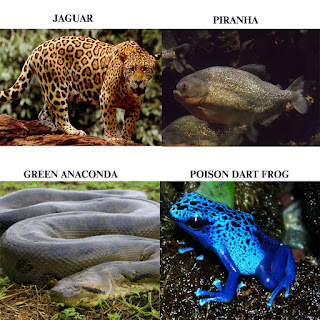 If you had a tough time guessing, it's because all four of those animals are widely regarded as the top four most dangerous animals in the Amazon.  But the answer is....

Those little guys come in several colors, with gold and blue often being the most prevalent (and dangerous).  Though they're small, just touching their skin can kill you! Actually - the poison in their skin is so deadly that it can kill 10 adult humans!

Their brilliant color is actually a warning to their potential predators. The poison can cause naseau, muscle paralysis, and death. Interestingly, if bred in captivity they're not likely to be poisonous. This is because their poison comes from their diet while in the wild - eating other dangerous creatures like termites, centipedes, and ants. Leimadophis Epinephelus, a special kind of snake found in Amazon rainforests is the only natural predator of poison dart frogs.