Which TWO of these Animals are Left Handed?

In recognition of Left Handers Day, can you guess which TWO of these animals are believed to be predominately left handed? 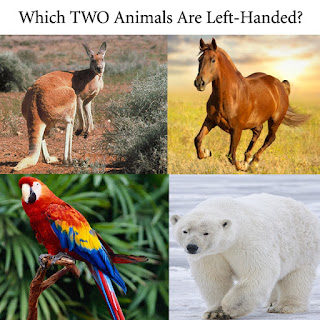 If you guessed A and D, then you're wrong! Though polar bears and horses tend to be the animals most commonly believed as being left handed, they're actually not! Scientific studies have actually shown polar bears to have 50-50 preference for right vs. left paws.

As for horses, they're traditionally led and mounted from the left side and trained to turn to the left, but this doesn't mean they are left-hoofed. Rather, 53% prefer to lead with their right hoof, 40% with their left hoof, and 7% no preference at all.

Parrots are left-hand dominant, with about 90% having shown left-foot preference in picking things us.

As for Kangaroos, the red kangaroos and eastern gray kangaroos - two popular Australian species - almost always use their left paws.  Interestingly, other species of kangaroos would have a hand preference when on two paws, but when walking on four paws they didn't have any preference. However, the red and eastern gray species showed left hand dominance regardless of if they were on 2 or 4 paws.

I don't know which is more amazing - that there are left hand-dominant animals, or that there are actual scientific studies to find this stuff out! But what's also interesting is that only about 10% of the world's human population are left handers!
Posted by Kyle L. Shoop at 8:35 PM No comments: