The Longest Living Animal Is...

What's the longest living animal ever discovered? The answer may surprise you!

Most people would probably think it's a Galapagos Tortoise, whose lifespan is over 100 years. But you'd be wrong.

Before we get to the winner, the runner-up is the Greenland Shark. The oldest recorded living Greenland Shark was 392 years old! They live in the Northern Atlantic Ocean and live on average of 200 years. They don't reach their adult size until 100 years old!

Though it's the runner up of all animals, it does win the award for longest known living vertebrate animal.

The winner is .... the Ocean Quahog Clam!

The animal can live over 400 years on average, and the oldest known living one was discovered at 507 years old!!! It was given the name 'Ming' because it would have been alive during the Chinese Ming Dynasty. Like the Greenland Shark, these Clams also live in the Northern Atlantic Ocean. 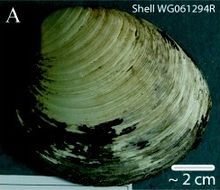 But I have a feeling that once the Loch Ness Monster is caught, we'll have a new winner!
Posted by Kyle L. Shoop at 8:16 AM