I could watch videos of clumsy penguins all day. Here's a great one:

It's getting hotter outside - anyone wanna go for a swim? This video is awesome:

It takes a couple seconds before the horse attacks the alligator - TWICE!

Mantis Shrimp: Beauty AND the Beast!

I just learned about one of the most fascinating creatures I've ever heard of. While meeting readers of my books at FanX by Salt Lake Comic Con, a reader told me about the Mantis Shrimp. I had to go home and research this amazing animal. My conclusion is that this crustacean is both a Beauty and the Beast. 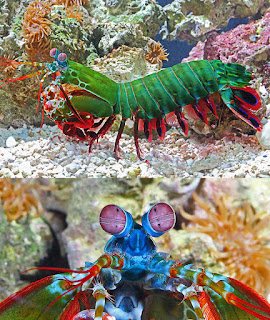 Second: Their vision is spectacular! They have 16 cones in their eyes. Humans only have 3 - red, green, and blue. Humans can only see derivatives of those three colors because those are the only cones in our eyes. The animal with the next most cones are butterflies - with five. Mantis Shrimp have 16! They can detect ten times more color than humans, including ultraviolet light!

So, they're beautiful and can see an unimaginably beautiful color spectrum.

They are also extremely deadly.

Mantis Shrimp have powerful club-like appendages that fold beneath its body, which makes it look like a preying mantis. These clubs have the ability to strike at the speed of a .22 caliber bullet (50 times faster than a blink of an eye). A blow from these easily strikes through the shell of a crab or mollusk. (There are many videos online of the Mantis Shrimp beating up other animals. So many that I couldn't decide which to post.)

The speed of a blow could also break through glass. Many aquariums do not hold Mantis Shrimp because they will devour other animals in a tank, and because the tank itself won't be able to contain it.

Think about that. Oh, and they are quick swimmers and are very territorial.

Beauty and the Beast, indeed.
Posted by Kyle L. Shoop at 10:20 AM No comments: